Jerusalem Artichoke, or Sunchoke, is an herbaceous perennial in the sunflower family. Not only are the tuberous roots an easy-to-grow vegetable, but they also burst to life in the late season with yellow blooms that are a wonderful pollinator attractor as well as a cut flower.

I discovered Sunchokes last winter when one of my farmer friends was selling tubers that weren’t quite market quality but would grow into strong plants. As we’ve built up our homestead for the past five years, I’ve been scouting out ways to grow food year-round in our garden. So sunchokes seemed like a no-brainer!

Now that I have completed my first bountiful harvest, I wanted to share my research and observations with all of you. And at the bottom of this article, I’ll have links to other sunchoke resources, as well as recipes to try.

Sunchokes are native to North America. Indigenous peoples extensively cultivated this as a crop, and because of trading and its tuber producing ability, it spread quickly across a good portion of the continent. So, it is unknown as to where exactly it originated.

The name Jerusalem Artichoke is confusing and somewhat mysterious since the plant has no connection to Jerusalem and isn’t closely related to artichokes. Some believe that the Jerusalem part of the name is derived from Italian settlers who called it girasole (pronounced  [dʒiraˈsuːlə]). That is the Italian word for sunflower. Over time the pronunciation may have shifted to Jerusalem. The artichoke portion of the name is credited to a French explorer, Samuel de Champlain, who thought the tuber tasted like an artichoke. After tasting some sliced, fermented sunchokes on last week’s pizza, I have to agree. Yum!

Regardless of the name, this crop was a commonplace food across much of America for centuries and eventually worldwide. French Canadians relied on it as a critical food source during harsh winters. European explorers brought sunchokes to their homelands, and sunchokes quickly proliferated there as well.

Helianthus Tuberosus is a perennial hardy in zones 3-8. But I’ve read that warmer climates can successfully grow sunchokes in the cool season and reap a lovely harvest in several places. Sunchokes are an incredibly easy-to-grow plant. If they are placed in well-draining soil, in part to full sun, they will come back year after year. 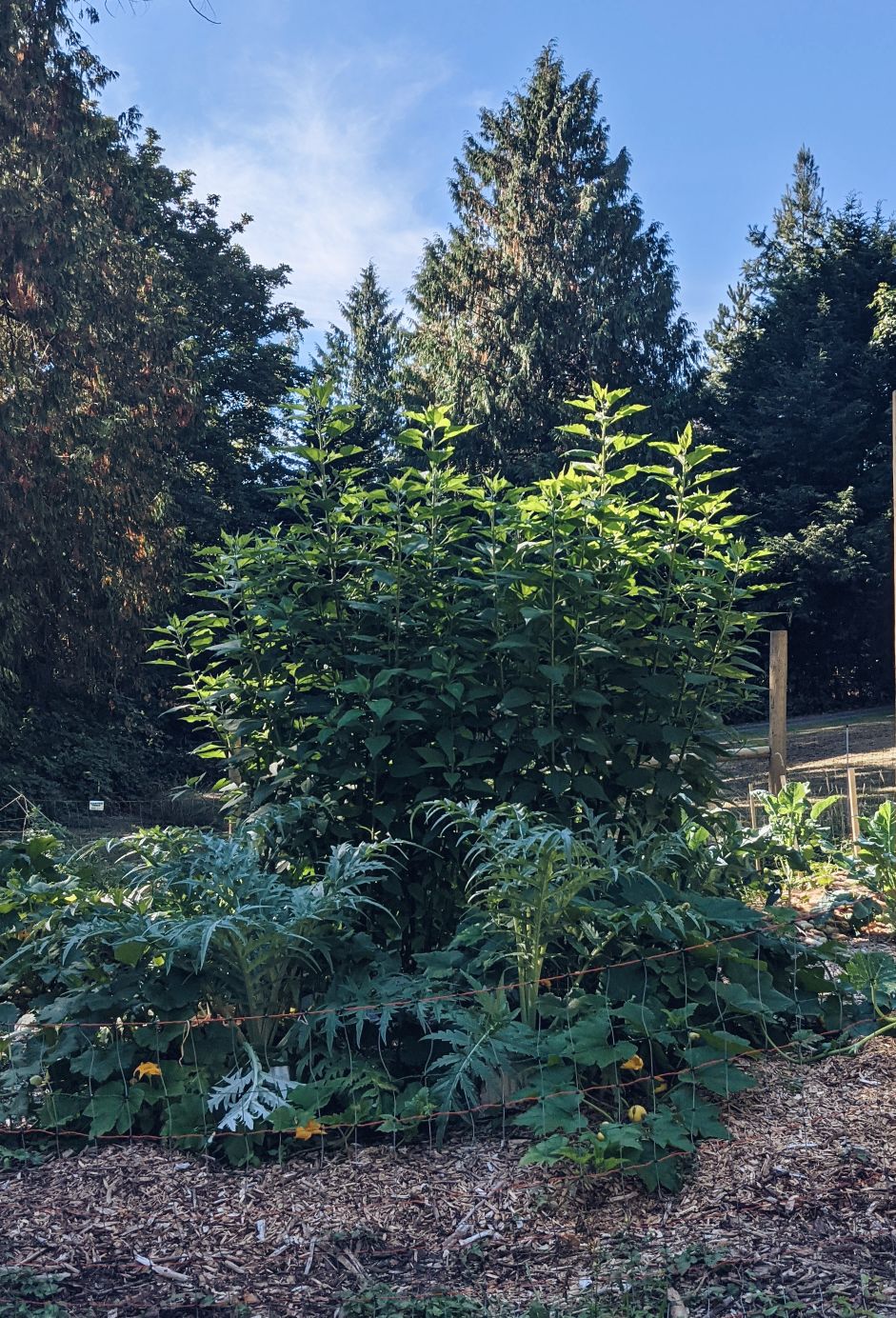 Choose your growing site wisely! Sunchokes are prolific tuber producers. A single tuber can grow into a plant with an 18” root radius and produce up to six pounds of tubers.  It has a reputation that once planted, it’s there to stay. I grow my sunchokes in a 12” raised bed so I can easily contain any out of bounds stragglers. Container growing is also a viable option. If you decide to use containers, go big! Plant a single tuber in nothing smaller than an 18” container, and you should get a good harvest.

Sunchokes can be planted in the spring or fall when the ground is workable. Plant each tuber 4-6” deep and spaced 12-18” apart. They don’t need amazing soil, but soil fertility will bolster your crop. If you’re unsure what your soil needs, I highly recommend getting your soil tested before adding fertilizers and amendments.

Soon, you’ll have fast-growing plants that can reach an amazing 12’ in one growing season, depending on the variety. These tall plants can get top-heavy and blow over in a good wind. You can either give them support on a trellis or pinch the stems when they are young (1-2’ tall). Pinching will encourage dormant buds to burst, and the sunchoke will grow bushier and produce more blooms.

Sunchokes are drought tolerant but will grow more tubers if given regular water. Be careful not to overwater. The tubers are susceptible to rot. A good way to test soil moisture is to probe the soil with your finger to feel the soil’s hydration—only water when the soil moisture drops below an inch deep. The frequency you water really depends on where you live.

Harvest your sunchokes in late fall after the plant has died back. Ideally, wait until you’ve had a few good frosts. The cold temperature makes the tubers sweeter. Be gentle when harvesting because sunchokes have very thin skins. 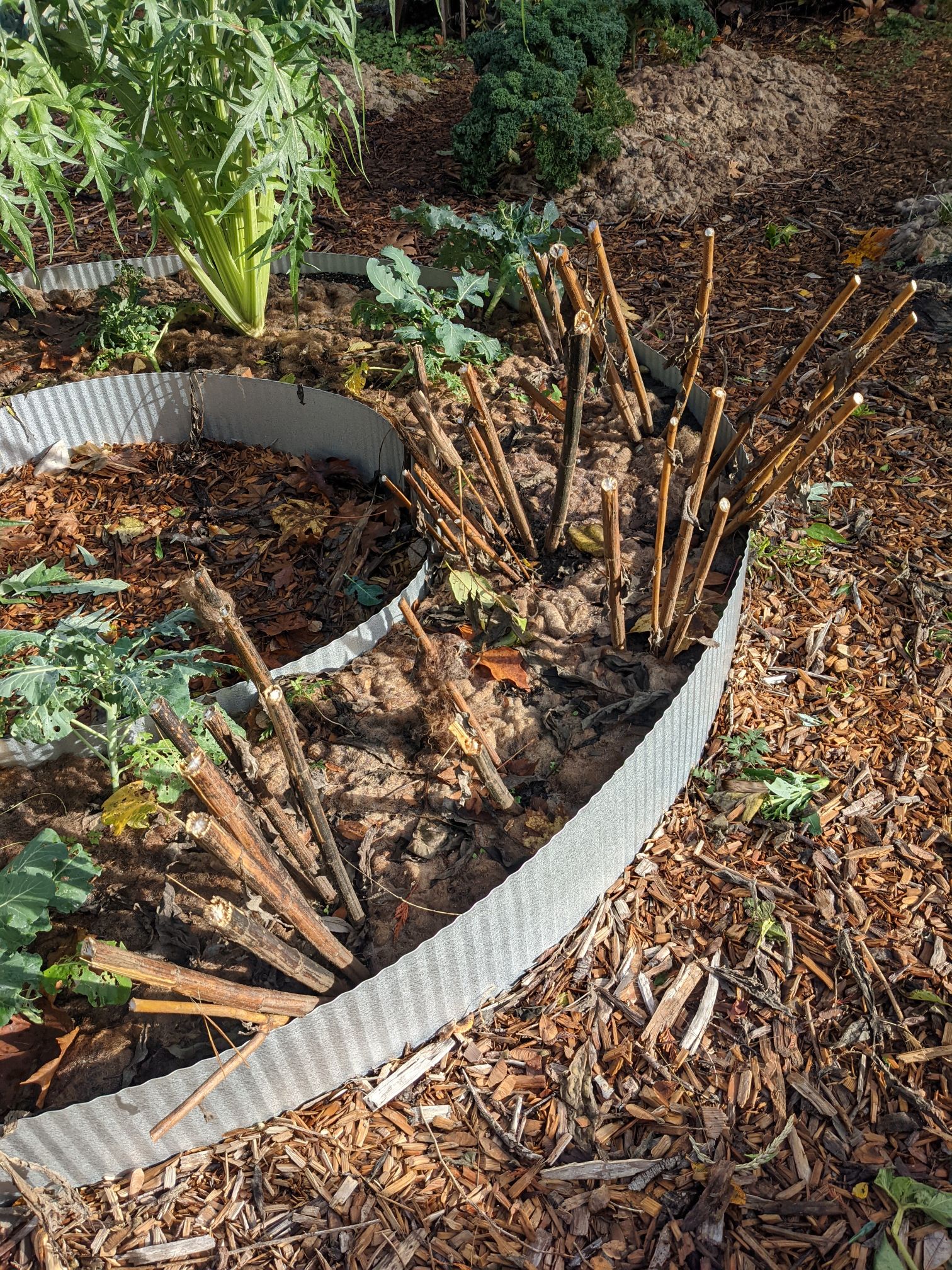 Remove any tubers with discoloration or rot. DO NOT place intact tubers into your compost or tossed to the side. They will happily pop up in their new home.

Sunchoke tubers lose moisture rapidly. Gardeners in milder climates where the ground doesn’t freeze can leave tubers in the ground and harvest as needed. Otherwise, get your tubers cleaned and in storage ASAP. The thin skins lead to rapid dehydration. The goal is to store the tubers in high humidity, at a temp just above freezing. A container with a damp medium, like sand, works well.

Consuming sunchokes could lead to some flatulence people due to the high levels of inulin. Inulin belongs to a class of dietary fibers known as fructans. Some plants use it to store energy and are typically found in roots or rhizomes.

When we consume inulin, we supply our gut with a wonderful prebiotic, but it isn’t digested until it reaches the large intestine, where it is fermented. That fermentation leads to gas. One of the fun nicknames of Jerusalem Artichokes is ‘Fartichokes.’ If you are new to Sunchokes, it’s good to start with small quantities to see how your body handles it. Or, if you’re a home fermenter, I highly recommend fermenting your tubers. They maintain their crisp texture but lose the power of the inulin effect.

Sunchokes, when eaten raw, have the texture of a water chestnut and a slightly sweet, nutty flavor. Cooking sunchokes is also very simple. You can treat them pretty much like a potato. They make tasty chips, work well roasted, baked, or boiled in soup. Here are links to several recipes worth giving a try.

My goal is that each month you will get an update of garden tasks, blog articles that are relevant and educational, and early access to sales.

We'll start with your goals and build an entire year of garden centered adventures together. Whether you are a brand new gardener or a seasoned grower, I want to help you level up.